Open a door off The Cross in Worcester and you’ll enter a world of Art Deco glamour and sophistication, when steam trains ruled supreme and travellers were treated like valued customers rather than cattle to be herded into crammed carriages.

Centenary Lounge, which opened in April 2019, offers its discerning visitors a far different experience to the usual coffee shop.

Polite, smiling staff are clad in starched white shirts – as are the tables, which are bedecked with branded crockery. Black and white photos celebrate the Great Western Railway’s golden era.

The brains, imagination and driving force behind Centenary Lounge is its founder and owner Aasia Baig. She took time out of her busy schedule – there are two further sites, one a lounge and the other a refreshment kiosk in central Birmingham – to tell Fresh Nous marketing manager Lisa Guest about her business journey, how she delivers outstanding customer service across three sites and the importance of staying on the right track as your company grows.

Aasia’s background is as a successful retailer – her career in this sector began at the age of 21 – and she moved into food and drink in 2009 with the opening of the first Centenary Lounge at Moor Street Station.

“I was rejected the first time I applied to run the café but fortunately I got another try as it didn’t work out for the people who took it on,” she recalled.

“Chiltern Railways’ commercial director loved everything to do with GWR. He introduced me to David Redfern, who carried out some of the restoration work at Moor Street Station and even had a fireplace from Paddington Station in London. He thought it should go to a good home so the Centenary Lounge concept was born.

“I spent 18 months researching the Art Deco period as every tiny detail had to be right – the panels, flooring, metalwork, crockery, photos, carpets and the iconic light and dark coloured furnishings.”

Centenary Lounge Moor Street was a hit – and even survived turbulent times in 2015 when a 350,000 tonne landslip bet

“Chiltern Railways did an impact report to see how businesses like ours had fared but it didn’t affect us that badly. Our customers just used other methods of transport!”

A second site at Snow Hill opened in 2012 with Aasia again putting a distinctive 1927 stamp on a previously unremarkable unit. She then began her search for a stand-alone site close to a station. On a visit to Worcester in 2016 on a warm summer’s day, she spotted a ‘for sale’ sign above a jewellers shop and immediately recognised the potential.

So began a relentless three-year transformation. Aasia had to apply for permission to convert the building from A1 to A3 use and ventilation for a commercial kitchen, new drainage and a new water supply were also required.

Aasia was also aware of the challenges of running three sites and the importance of not diluting the brand she had worked so hard to grow. 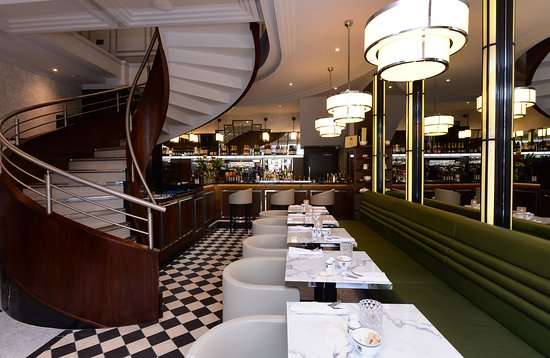 Staff training and ongoing motivation is vital – “I give staff the tools to let their personality shine through. However, there are some areas that are non-negotiable and I expect my team to deliver high standards of customer service at all times.

“Service is attentive, not overbearing. Gauging whether people need your attention is an important skill.”

There are other touches that set Centenary Lounge apart – and, most importantly attract and retain customers.

One lady, whose breakfast had gone cold because of having to leave her table to take an emergency phone call, was so impressed by the chef cooking a dish again from scratch that she booked a table for dinner that evening.

Afternoon tea, which is on the menu of most hospitality venues these days, features fresh fruit, a variety of sandwich fillings and delicate mousses and jellies rather than large slabs of cake and cheese/ham.

Aasia also appreciates the importance of turning customers into loyal fans and brand ambassadors by dealing promptly with enquiries and social media reviews.

Here at Fresh Nous we wish Aasia continued success and are proud to declare her our first Customer Service Champion.

Please check back soon to find out which Worcestershire businesses have followed in her footsteps.

Stay in the loop with our round-up of important news updates.